The Sex and Cash Theory

In Hugh MacLeod’s book How to be Creative (downloadable as a PDF here), he talks about the Sex and Cash Theory.

Basically, he says, creative people have two jobs. One is the ‘sexy’ kind, the other pays the rent. If you’re really lucky these intersect at some point, but that kind of luck doesn’t grow on trees.

Anyway, MacLeod is quite a funny guy (and you should check out his blog called gapingvoid), so I’ll let him explain the theory himself (and if you take anything away from this, go and read his book):

A good exam­ple is Phil, a NY pho­to­grapher friend of mine. He does really wild stuff for the indie maga­zi­nes– it pays nothing, but it allows him to build his port­fo­lio. Then he’ll go off and shoot some cata­lo­gues for a while. Nothing too exci­ting, but it pays the bills.

Another exam­ple is some­body like Mar­tin Amis. He wri­tes “serious” novels, but he has to sup­ple­ment his income by wri­ting the occa­sio­nal news­pa­per article for the Lon­don papers (novel royal­ties are bloody pathe­tic– even bes­tse­llers like Amis aren’t immune).

Or actors. One year Tra­volta will be in an ultra-hip flick like Pulp Fic­tion (“Sex”), the next he’ll be in some dumb spy thri­ller (“Cash”).

I’m thin­king about the young wri­ter who has to wait tables to pay the bills, in spite of her wri­ting appea­ring in all the cool lite­rary maga­zi­nes.… who dreams of one day of not having her life divi­ded so harshly.

Well, over time the “harshly” bit might go away, but not the “divi­ded”. As soon as you accept this, for some rea­son your career starts moving ahead fas­ter. I don’t know why this hap­pens. It’s the peo­ple who refuse to cleave their lives this way– who just want to start Day One by quit­ting their current crappy job and moving straight on over to best-selling author. Well, they never make it.

Any­way, it’s called “The Sex & Cash Theory”. Keep it under your pillow.

MacLeod’s “thing”, by the way, is drawing cartoons on business cards. His book is full of them, and makes for some pretty entertaining reading. Go on. Read it. 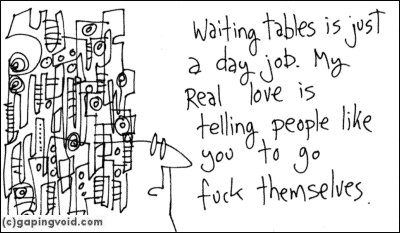 Things I have learned in my life so far →

← Where It’s At: A publication by Design Indaba & disturbance