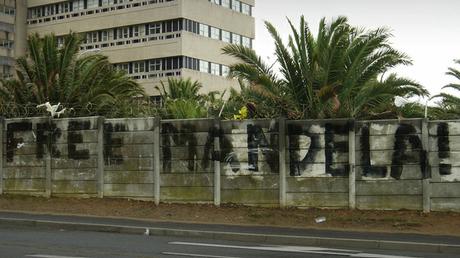 Prolific Cape Town street artist and activist Faith47 is contesting the City of Cape Town’s by-laws against graffiti and street art, on the grounds that much of the work in and around Cape Town is tantamount to public heritage. The “Free Mandela!” slogan is a pertinent example – once found on a wall in Anzio Road in Observatory (you can still see it here in Google maps), but recently painted over by the City. Painted during Apartheid, the words are a simple yet powerful reminder of our country’s history and the atrocities committed at the time.

In March 1980 the slogan “Free Mandela!” was developed by journalist Percy Qoboza, sparking an international campaign that led the UN Security Council to call for his release. The campaign incited international protests and increased foreign pressure to release Mandela; however, the South African government did not budge for another ten years. An icon of freedom and human rights, Mandela’s imprisonment became symbolic of a much broader oppression, and the “Free Mandela” slogan representative of the wider struggle for liberation in South Africa.

Faith and friend Bazil Baxter have contested the removal of the painting based on its cultural and historic significance. “We advocate for the preservation of the memory of the “FREE MANDELA” slogan, in homage to the person who risked his/her life by painting that slogan in a painful time of South African history,” says Faith.

After an unsuccessful permit application to the City of Cape Town to redo the slogan and a further request for appeal that has been ignored by the City, Faith has started an online petition to grant permission for the repainting.

“The City of Cape Town is the world design capital 2014, yet the new bylaws that have been instituted are restricting and policing non-violent ‘crime’, like street art, skateboarding, busking, dogs barking, climbing trees and washing cars in public,” it reads. “We advocate that the council instead use their energy to facilitate new discussions on how to work creativity and to support the creative industries in order to create a more inclusive, open minded society.”

If, like me, you believe the City should be protecting street art as cultural heritage, let alone destroying it in the name of the sanctity of the wall it is painted on, then add your name to the hundreds of others who have already shown their support.

You can do that here.

In the words of Mandela: “What are you going to do? Will you come along with us, or are you going to co-operate with the government in its efforts to suppress the claims and aspirations of your own people? The struggle is my life. I will continue fighting for freedom until the end of my days.” (Cited from “The struggle is my life” - Nelson Mandela press statement of 26 June 1961.)