I am because we are: Madiba mural by Ricky Lee Gordon 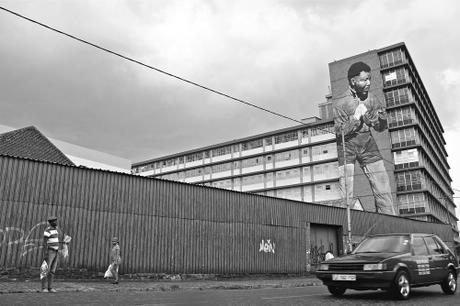 Umuntu ngumuntu ngabantu. This is the ethos of Ubuntu philosophy, which translates as ‘a person is a person through other people’. It is this mantra that both guided the life of Nelson Mandela and inspired the tribute painting to this giant of a man by Ricky Lee Gordon.

The 40-metre-tall (10-storey) Mandela mural in the east city of Johannesburg was commissioned by the Maboneng precinct as a gift to the city in memory of South Africa’s past president and leader into democracy.

Gordon says he was humbled by the invitation to paint the mural, which he says is “inspired by Madiba’s definition of Ubuntu: ‘You cannot be human all by yourself’.”

Here is the rest of his artist’s statement:

I chose to paint the iconic image of him boxing as he believed all were equal in the ring. Also this wall is not too far from the rooftop where this image was taken. I was so honored when permission was granted to me to paint the mural using the image by Bob Gosani (copyright by the BAHA foundation).

The mural took me 4 days to complete in 2013 just after Madiba’s passing. And I almost completed it on the day of his funeral; with only a few touchups to do, the storms and winds came down and the window washer broke and so completion was delayed to 2014.

I am truly inspired by the legacy of Madiba, forever grateful and motivated to continue living to achieve his vision.

I am because we are.

← The future is now: Design and technology trends for 2014