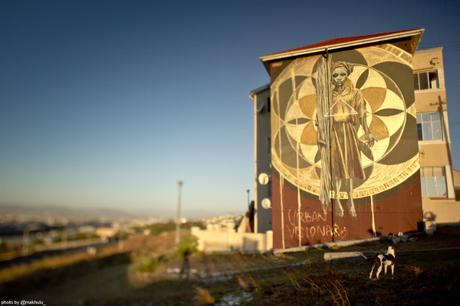 Since late 2013 I’ve been working on a pretty innovative project called #ANOTHERLIGHTUP, as project manager on behalf of Design Indaba and in collaboration with artist Faith47 and Lyall Sprong of designer consultancy Thingking. #ANOTHERLIGHTUP is an exploration into how street art can leverage the power of crowd-funding to activate the public into helping create measurable change in their community. Basically we’re using street art and Twitter as a medium to raise funds for streetlights in a low-income community in Khayelitsha.

With the initial concept of seeing how public art can translate into public change, we reached out to the organisation VPUU (Violence Prevention through Urban Upgrade) whose active groundwork in Khayelitsha has seen a marked decline in crime over the last few years. Together we devised a plan to raise money for streetlights in a high crime area in Monwabisi Park. These will light up a pathway that joins public taps with community meeting places to make the area a safer space for community members.

The crux of it is that these people have no access to water or toilets in their home and this means making a mission outside, in the dark, any time they or their children need to use the bathroom at night. Child rape is one of the biggest issues in the area.

It has been proven that there’s a direct correlation between crime and light (or the lack thereof) and so lighting up the pathway can be expected to directly impact on crime in the area. 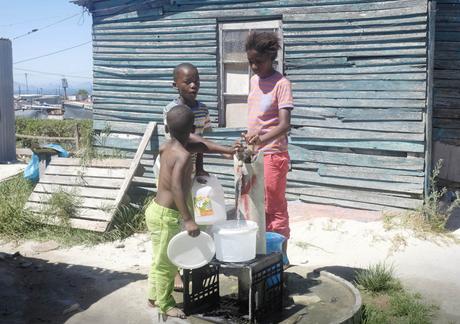 Kids at a communal water tap in Monwabisi Park, along the pathway to be lit

The mural, named “Harvest”, was painted by Faith47 on one of the council buildings in District Six alongside the busy De Waal Drive (previously the site of another mural by Faith from a few years back). Thingking embedded LED lights into the mural, which are activated by Twitter. When someone Tweets #anotherlightup they light up momentarily, while when someone donates money to the cause the lights switch on for the entire night. This feedback indicates to the public that the community is working together to light up another, less privileged, part of their community – bridging the gap between the geographically disparate areas.

The Harvest mural lit up at night. Photo © @makhulu_.

The good news is that the project has received masses of media attention… from Oprah magazine to the Cape Times and countless magazines, blogs and radio slots in between. The bad news is we’ve only raised nearly enough for 2 of the 70 lights to date… we need around R500 000 and we have R12 940 in the bank. Something we’ve quickly learnt is that “click activism” is the new black (remember the “selfie without makeup” saga?) and while people are happy to Like and RT away, it’s monumentally harder to get them to donate.

So we move onto plan B.

In June 2014 we launch a second campaign drive that incentivises donations based on a model of reciprocity. Launching on Thundafund (an SA equivalent to Kickstarter) the new campaign has tiers to add value to contributors, whereby different sponsorship amounts receive tokens of thanks – in the form of recognition, product or experience – in order to move from a space of charity to a space of trade. Encouraging a mindset of collaboration and active involvement, people who contribute are perceived as “backing the project” rather than simply donating to it.

These tokens will take the form of variously sized prints of the mural, some signed by the artist, in limited editions. We’re also looking at interactive experiences like a tour of Cape Town’s street art and a launch event in Monwabisi to engage with the community there. The top level is something Lyall calls an “in-house dot matrix display with customizable graphics”. Sounds fancy. It’s basically a light installation made with LEDs, in case you want your name emblazoned on your wall. They look really pretty.

We plan to launch on 4 June. Watch this space for updates.

To contribute now go to anotherlightup.com.

This project needs your support.

Rob Stokes: From bedroom to buyout – an entrepreneur’s story →

← I am because we are: Madiba mural by Ricky Lee Gordon