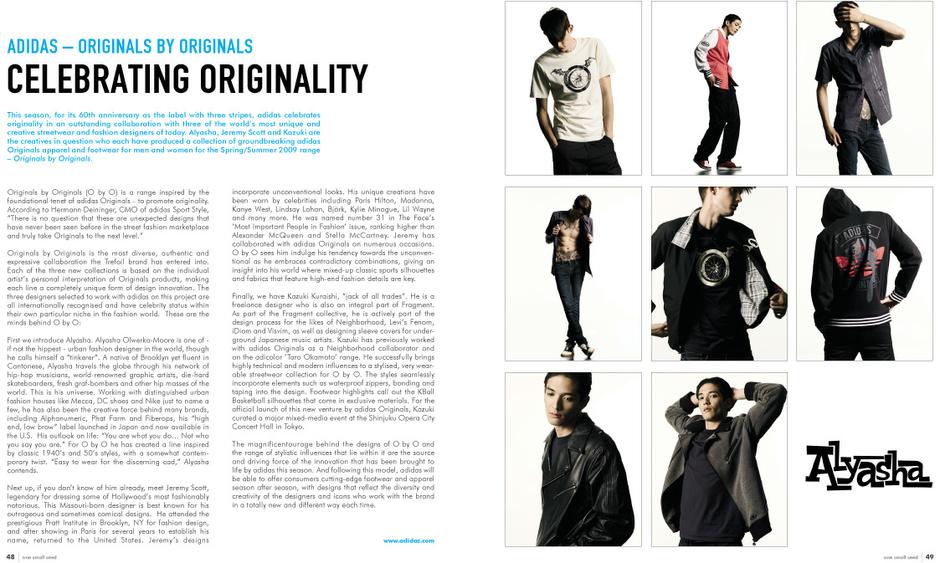 This season, for its 60th anniversary as the label with three stripes, adidas celebrates originality in an outstanding collaboration with three of the world’s most unique and creative streetwear and fashion designers of today. Alyasha, Jeremy Scott and Kazuki are the creatives in question who each have produced a collection of groundbreaking adidas Originals apparel and footwear for men and women for the Spring/Summer 2009 range – Originals by Originals.

Originals by Originals (O by O) is a range inspired by the foundational tenet of adidas Originals – to promote originality. According to Hermann Deininger, CMO of adidas Sport Style, “There is no question that these are unexpected designs that have never been seen before in the street fashion marketplace and truly take Oringals to the next level.”

Originals by Originals is the most diverse, authentic and expressive collaboration the Trefoil brand has entered into. Each of the three new collections is based on the individual artist’s personal interpretation of Originals products, making each line a completely unique form of design innovation. The three designers selected to work with adidas on this project are all internationally recognised and have celebrity status within their own particular niche in the fashion world. These are the minds behind O by O:

First we introduce Alyasha. Alyasha Olwerka-Moore is one of, if not the hippest, urban fashion designer in the world, though he calls himself a “tinkerer”. A native of Brooklyn yet fluent in Cantonese, Alyasha travels the globe through his network of hip-hop musicians, world-renown graphic artists, die-hard skateboarders, fresh graf-bombers and other hip masses of the world. This is his universe. Working with distinguished urban fashion houses like Mecca, DC shoes and Nike just to name a few, he has also been the creative force behind many brands, including Alphanumeric, Phat Farm and Fiberops, his “high end, low brow” label launched in Japan and now available in the U.S. His outlook on life: “You are what you do… Not who you say you are.” For O by O he has created a line inspired by classic 1940’s and 50’s styles, with a somewhat contemporary twist. “Easy to wear for the discerning cad,” Alyasha contends.

Next up, if you don’t know of him already, meet Jeremy Scott, legendary for dressing some of Hollywood’s most fashionably notorious. This Missouri-born designer is best known for his outrageous and sometimes comical designs. He attended the prestigious Pratt Institute in Brooklyn, NY for fashion design, and after showing in Paris for several years to establish his name, returned to the United States. Jeremy’s designs incorporate unconventional looks. His unique creations have been worn by celebrities including Paris Hilton, Madonna, Kanye West, Lindsay Lohan, Björk, Kylie Minogue, Lil Wayne and many more. He was named number 31 in The Face’s ‘Most Important People in Fashion’ issue, ranking higher than Alexander McQueen and Stella McCartney. Jeremy has collaborated with adidas Originals on numerous occasions. O by O sees him indulge his tendency towards the unconventinal as he embraces contradictory combinations, giving an insight into his world where mixed-up classic sports silhouettes and fabrics that feature high-end fashion details are key.

Finally, we have Kazuki Kuraishi, “jack of all trades”. He is a freelance designer who is also an integral part of Fragment. As part of the Fragment collective, he is actively part of the design process for the likes of Neighborhood, Levis Fenom, iDiom and Visvim, as well as designing sleeve covers for underground Japanese music artists. Kazuki has previously worked with adidas Originals as a Neighbourhood collaborator and on the adicolor ‘Taro Okamoto’ range. He successfully brings highly technical and modern influences to a stylised, very wearable streetwear collection for O by O. The styles seamlessly incorporate elements such as waterproof zippers, bonding and taping into the design. Footwear highlights call out the KBall Basketball silhouettes that come in exclusive materials. For the official launch of this new venture by adidas Originals, Kazuki curated a major mixed-media event at the Shinjuku Opera City Concert Hall in Tokyo.

The tripartite mind of this magnificentourage behind the designs of O by O and the creative diversity that lies within it is the source and driving force of the innovation that has been brought to life by adidas this season. And following this model, adidas will be able to offer consumers cutting-edge footwear and apparel season after season, with designs that reflect the diversity and creativity of the designers and icons who work with the brand in a totally new and different way each time.