In the Teeth of Stupefying Odds

Close your eyes and picture a wall of hunting trophies made up of the heads of psychedelic deities, caught in the wrath of their last deafening roar. Terrifying thought? You’re on your way to grasping the fierce mania embodied in AJ Fosik’s sculptural works. With titles like ‘As Good as Any God’, ‘Idol for the Absurd’ and ‘Embracing Stochasticity’, their intensity is clearly pervasive – from conception through to bold realisation. And while the American artist’s work resides unremittingly in the realm of his sabre-toothed wit, the zeal with which it clings to his convictions is nothing less than devout.

Sarah Jayne Fell talks to AJ Fosik about God, acid trips and impending doom, as well as his latest body of work, which fits somewhere roughly in between. 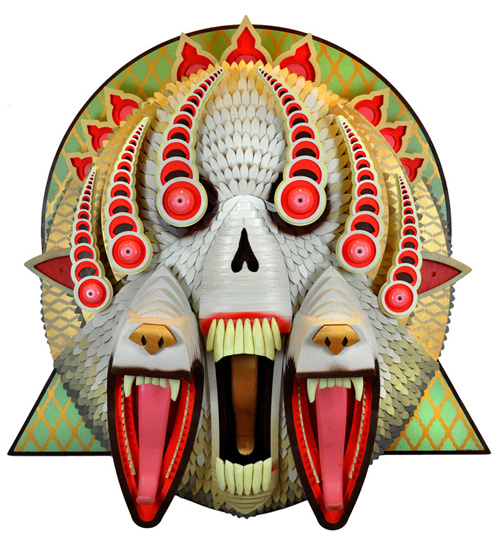 Who is AJ Fosik? (And what does AJ stand for?)

AJ Fosik is a benevolent and loving creator who will smash and burn everything you love if you don’t exalt and praise his name, which the faithful can tell you is Antonius Jamiroquai.

Tell me about when and where you grew up…

I grew up gnawing on the rusty bones of Detroit, Michigan. We washed down dinner with a glass of tears from each of the Big Three and at night we would use the axles of Plymouths and Pontiacs to bar our doors against the wolves and prostitutes.

I’ll probably never get to meet you so what kind of person would you say you are?

Don’t be so negative, we could have a chance encounter in an airport bathroom in some far-flung port of call. I’m a raptor.

Does it surprise you that there would be an interest in your work all the way in ‘deep dark Africa’?

I’m surprised, yes. Given that I’m American, and a product of the American education system, I was quite surprised to learn of the existence of a ‘South’ Africa. The globes we buy from Walmart only feature the US of A on them so I’m not sure exactly where you are but I’m guessing it’s close to Florida.

You studied illustration. Why the departure?

You’ve said your work draws on American Folk Art, and that there’s a jumble of ideas that all represent American iconography. At the same time, as a South African, I feel a strong connection and appeal to it. I guess the reference to wild animals is universally understood. What is it that draws you to animal subjects?

I don’t think I’ve ever said that. It’s possible, I suppose. I’m prone to blackouts and grandiose comparisons. While I do appreciate American Folk, I prefer to draw from all the grandest traditions of metaphysical chicanery throughout history. The bared fangs of an animal are intensely immediate and, at the same time, perfectly express the eternal cycle. There is a certain hypnotic quality one experiences when staring into the jaws of the infinite. It definitely holds a universal appeal

There’s also the focus on spiritual iconography in your work. Are you a spiritual person? And if not, what are you trying to communicate through the ‘spiritual’ aspect of your subject matter?

Well now we’re getting into it. I think the endless number of gods we keep making are a curse on us all. Humanity has a huge black oily tumour on its collective consciousness and that is God in all his mad, manmade incarnations. It really is the last vestige of our club-wielding, stick-rubbing, cave-dwelling past. We know so much and our potential as a species is so much more incredible than anything a group of goat herders came up with in the desert 2 000 years ago, yet we seem doomed to cling to it. My work is just a microscopic incision, however futile, to lance the greasy tumour of mysticism and a plea to embrace our species’ potential.

A hard-to-miss point of your work is that it’s so, almost self-consciously, handmade. Is this a reaction to the digitisation of so many art forms? Or is there some other drive (or point you are trying to make) causing you to work in these media?

I like the accessibility of handmade. There is such a huge distance between those of us in the West and most of the objects we surround ourselves with that when you see something created by hand there’s an immediate familiarity and connection, regardless what other intentions the creator had in mind. The endless stream of plastic from China has its zealots and devotees. Well, I can use that same trick coming from the opposite direction.

One thing that resonates strongly in your work is the use of psychedelic colour – it reminds me of trance parties and festivals, a pantomime or an acid trip. What is it for you? Can you explain your choice of palette?

Intensive meditation, ego-shattering journeys, connecting to the infinite and smashing back into the corporeal are all influences on my colour palette.

You’re supposedly quite nomadic, but from the last I’ve heard you’ve been settled in Philadelphia for some time. What is the appeal about this city and how does it affect your work?

How long till you think you’ll move on again? And where to next?
I’m leaning more towards survivalist compound aspirations these days. I’d like to start a stockpile of some kind, purchase a remote cabin on a mountain somewhere and wait for an impending disaster. We have so many great ones to prepare for these days – it’s not just your standard End Times or Race Wars. We’ve got viral outbreaks, the Yellowstone Caldera eruption, a global banking collapse. There really are just too many to choose from.

You have a show coming up at Jonathan LeVine. Tell me about it. Can we expect a deviation from your current work?

I don’t think deviation would be the right word; I feel my work has just been getting stronger in terms of the concept and craft coming together. I would say definitely bigger and more intense, yes. The fierceness and concept will be the same.

Attempt to change the status quo and challenge accepted tenets with the hope of a brighter tomorrow. Not accepting security in exchange for complacency.

Believe anyone who claims to hold all the answers and/or know the mind of God.

What’s next for AJ Fosik?