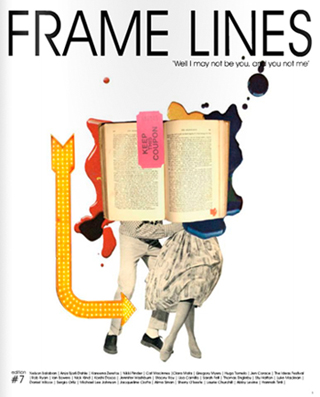 She looked across at him through the serving-hatch and watched him page through the Daily News. She stood chopping peeled carrots, two at a time, into little orange medallions. Onions sizzled in a pan nearby. She glared at the face hidden behind the printed pages, thinking, How nice for you to come home and put your feet up, read the paper, watch TV, while someone else cooks you dinner, baths your children, and then lies waiting for you in bed. As she chopped, the heavy blade knocked against wood: hollow, sharp, a high-pitched resonance that jarred in her mind. She tried to focus on the growing mound of orange, but was increasingly aware of the pile of dishes in the sink next to her. The night before last, he had offered to wash them after dinner. Don’t worry Honey, I’ll do them for you. Tonight can be your night off. The kids were at her sister’s. They had made love against the fridge, up on the stove, the metal plates cold against her bare skin, and then he had carried her upstairs to bed, leaving dishes and shoes and underwear for a time when things like that mattered. The next day, she had had a sick child to look after and a husband that had come home drunk and so the dirty dishes sat for another day.

And she watched him as she began to peel potatoes and thought, Perhaps she wouldn’t do them today, see if he’d notice. See if he’d even care. He probably wouldn’t notice if a plate went sailing past his head right now, straight out the window. That would save her some time. She smiled as she imagined herself picking one up, pausing as she thought, the potato peeler in her hand, poised in mid-air. In her mind, she picked up the plate, and drawing her hand back for some momentum, adjusted her aim to her husband’s balding head that was peering at her from above the newspaper. She imagined hurling the plate so that it smashed on his skull, pieces of white porcelain bouncing off the walls and scattering on the floor in all directions. He would look up in surprise, cry out, and his eyes would widen as she reached for another to fling at his cowering form. She looked down at the potato in her hand and continued peeling, but this time with a little more fervour as she envisioned his head, his anguished squeals as slices of pink fell from the peeler to the chopping board. Moving onto the chicken, the delight she felt as she ripped flesh from bone rose to her face that was beginning to look a little flushed as she continued to smile to herself. Her eyes sparkled when she added the meat to the pan, as the fat sizzled and spat; and while boiling potatoes hissed and sang she stood, hands flat on the counter, and she listened.

After chopping and mashing and frying every little part of her husband that she could conceive of, she dished up a plate heaped with steaming chicken stew and took it to her husband with a knife and fork. She placed her hand on his shoulder and beamed down at him saying, “There you go, Honey.” And he, lowering his newspaper and looking up at her with adoring eyes said, “Thank you Darling, that looks delicious. And don’t you look lovely today.”

Written as part of a Creative Writing portfolio of flash fiction and prose poetry, as part of an Honours Degree in English completed at the University of KwaZulu-Natal in Durban in 2007. It was subsequently published in Australian online literary magazine Framelines, Edition #7.