An artist profile written for the artist’s debut exhibition in LA, via artist management and consulting company SIMJEE TEXTOR (USA). 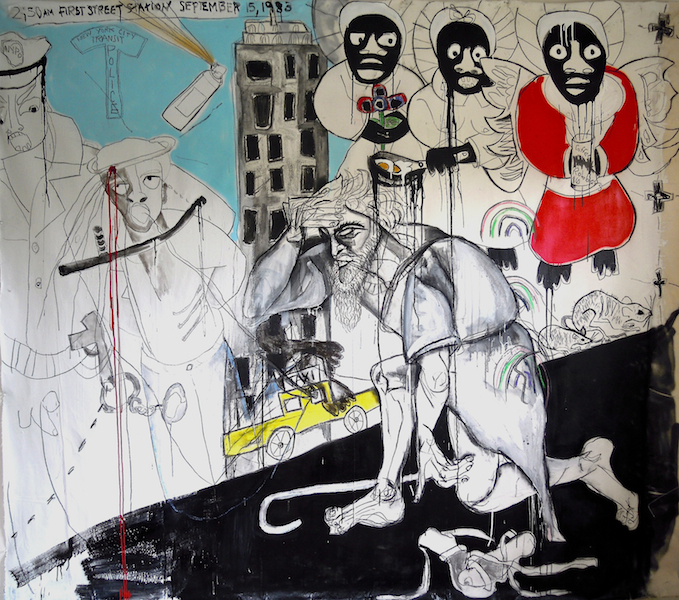 Memory is essential to art. Art curator Hans Ulrich Obrist refers to a continuously articulated struggle between the past, the present and the future. He has said, “It is urgent to protest against forgetting.” American artist Dana Louise Kirkpatrick’s work is the embodiment of this protest, simultaneously evoking a tribute to her modernist predecessors while layering her own contribution to the conversation being had amongst artists that span decades and continents.

Kirkpatrick creates expressive large-scale drawings and paintings that command immediate attention. Classically trained her oeuvre draws on the annals of art history. Art giants Picasso (b. 1881, Spain), De Kooning (b. 1904, Netherlands) and Basquiat (b. 1960, United States) live most fervently in Kirkpatrick’s work, and in so doing she creates a vehicle for not only preserving their memories but also breathing them new life. Her own milieu, living in New York City in the twenty-first century, both continues and updates their narrative, contributing to a visceral documentation of modern humankind and our culture.

Her background entrenched in contemporary society – unsettled, wrought with contradictions and new complexities that surpass the dynamics of even a decade ago – creates a new tension that looks to, and reveres, the past, while engaging in a continuous negotiation with the present, and surveying the future at arm’s length, partly with suspicion and partly in anticipation of something better.

Kirkpatrick’s energy and personal experience is ever-present in her work. Clothes filthy and covered in paint on the C train to a dirty warehouse in SoHo, she has seen a thousand images by the time she gets to her studio each day. These inform her creative process, as she channels and reimagines the phantasmagoria of her surroundings.

“I pull from sources,” she says. “Other artists’ work… rip pages from art books… a drummer on the subway begging… It just happens. I don’t think about it. I usually sit against the wall staring down a blank surface. Then it comes… Then it’s gone.” She is “not impressed by projectors, computers, stolen images, or studio assistants painting spots”. While reappropriating, her creation is her own, constantly evolving, unconcerned with her contemporaries’ work, and constantly “looking back and reissuing a new translation”.

Kirkpatrick’s nomadic, unsettled existence is evident in her choice of materials – house paint, scrap wood, raw canvas, flattened cardboard boxes – and this adds a grittiness unfamiliar to her German Expressionist compatriots. Instead of textbook oils, she has “fallen into the habit of using hard compressed charcoal, pastel, house paint, graphite, on anything around…”

Not stopping at found materials, Kirkpatrick is preoccupied with found imagery and prevailing memes, referencing popular culture, the art canon, everyday iconography and banal objects. Sports, music, popular culture, religion, war, race, poverty, love and sex are just some of the themes that abound, often contorted to point toward the darker side of human nature. Written language fills blank voids while creating giant chasms in the viewer’s sense of ease. But while her content is fraught with antagonism there is almost always an underlying humor – a commedia dell’arte that turns her grim subject matter into wry, sardonic commentary.

Mimicking these contradictions, Kirkpatrick’s sure, confident linework oscillates between being hard and dark or shaky and scrawling, dependent on the attitude of each piece. Her later work speaks louder in its more minimalistic approach. Offsetting stark black and white, intense primary colors fill sections with color blocking, often dripping from her subjects, the paint visibly running down their forms. Using these striking contrasts she echoes her thematic concerns.

“It’s a riddle how we love, suffer and survive,” says Kirkpatrick. “I’m fascinated. It’s the problem I can’t solve. Married to that gutting. Translating what I see. The lengths the Western world goes to avoid discomfort. The consumption… I don’t run from that.” 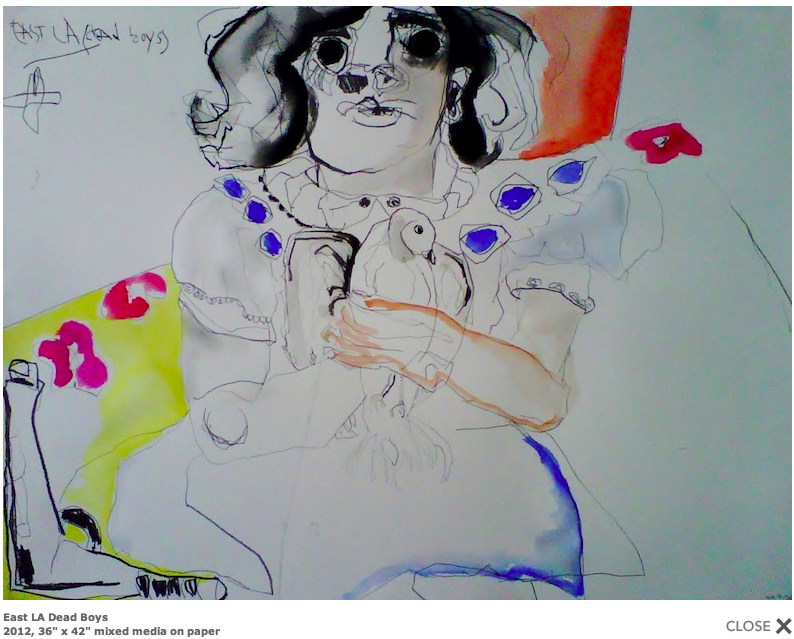 Like Basquiat, America’s “Black Picasso” as he so detested being called, Kirkpatrick talks to the great history of painting that came before her. She speaks of the artists she admires’ “ability to translate their inner demonic dialogue into undeniable beauty” and Kirkpatrick succeeds in doing the same. Amidst the angst and turmoil in her work serenity persists. A recognition that “a homeless kid on scholarship at Silverlake Conservatory of Music taking two buses to get to his guitar lesson has more grace than any silicone broad strutting down Rodeo Drive or Fifth Avenue” rings true. Kirkpatrick looks towards the things we turn away from in cowardice: “Dirty faces and shooting-up whores, a fighter with his face smashed in, the displaced and the unseen… all of that drives me. I’m not remotely interested in the lives of the comfortable or privileged. Those aren’t my heroes.”

An avid music lover Kirkpatrick turns too to musical genius for inspiration. She quotes Jack White, “the real deal”, she says, in a passage that sums her message up well:

White Americans, what, nothin’ better to do?
Why don’t you kick yourself out? You’re an immigrant too
Who’s usin’ who? What should we do?
Well you can’t be a pimp and a prostitute too
(The White Stripes) 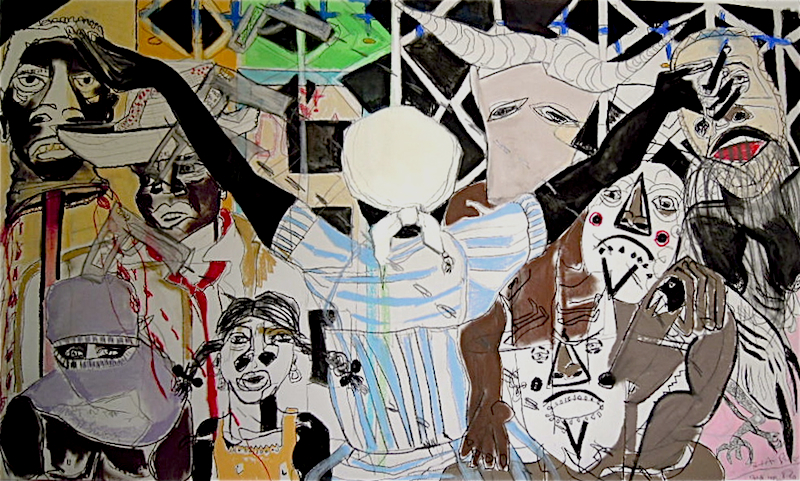 Kirkpatrick’s recognition of the hypocrisy of contemporary culture is one prevailing thread that ties her to a new guard of artists emerging as the new “canon” – although the term hardly still applies. “The pains of wealth don’t interest me. The triumphs of struggle do,” she says. “I guess do the math on that.” As an artist she finds kinship in her similarly minded contemporaries: “Banksy giving double middle fingers to Manhattan this month… I like that too.”

Like Banksy, Kirkpatrick is painfully aware that art itself has been tainted with the hypocrisies of our age. “What role do you think art plays in this day and age?” Under no grand illusions, she replies: “Making Larry Gagosian rich.”

Kirkpatrick refuses to be a passive observer. The role of the artist is no longer merely craftsman but producer of meaning, but in some as yet undefined way that is not delineated by a prescribed or set standard. As an artist Kirkpatrick’s heightened sense of empathy, self-awareness and forthright disposition is supremely evident in her impassioned technique. Together with her rich knowledge of art history, this delivers a compelling combination of the familiar and the refreshingly unique.

Dana Louise Kirkpatrick (b. 1976, Cambridge, Massachusetts) is an artist gaining rapid renown for her bold, large-scale artworks in mixed media. Her work references elements of Modern art, in particular German and Neo-Expressionism. She grapples with the dichotomies and contradictions embedded in contemporary Western culture, religion and humanity, using forceful iconography and a highly expressive technique.

Raised in Washington DC in an unstable, at times volatile household, Kirkpatrick was educated privately but lived on the fringes, struggling to stay in school and at one point becoming homeless. She went on to study Fine Arts at Georgetown University, graduating with honors in 2001. Here she received the DaVinci Medal for Excellence in Studio Art and the Misty Dailey Award for Outstanding Work in Studio Art.

She has held one solo exhibition in New York City, taken part in numerous group shows and donated work to many charity auctions, for organizations such as the Rema Hort Mann Foundation, Silverlake Conservatory of Music, The MusiCares and GRAMMY Foundation, Surfers Healing and the Tony Hawk Charitable Foundation.

The artist has been living and working between New York City and Los Angeles for the past nine years. Since relocating she has trained at The Art Students League of New York. Her current studio is based in SoHo in Lower Manhattan. She also consults for the Silverlake Conservatory of Music in Los Angeles.

Unwashed and Somewhat Slightly Dazed – named after the 1969 David Bowie song – is Kirkpatrick’s first solo exhibition to be held in Los Angeles. It runs from November 9 to December 21, 2013.