The Nike AM90 Sound

The Nike AM90 Sound is a tribute to the icon that is the Air Max 90, a shoe that represents something far greater than footwear. Radical in its design and colour scheme, it was never the chosen footwear for the shy and introverted. Adopted by athletes, performers and artists as an expression of style and attitude, on different playgrounds and at different latitudes, it evolved into the symbol of a movement that remains hard to define.

The AM90 Sound project documents this cultural journey, translating an almost intangible phenomenon into sound and visuals. Legendary photographer Shawn Mortensen travelled Europe to track the frequencies of young musos who share the Air Max 90 mindset but express it uniquely in their creative endeavours. The extensive photo and video documentaries that capture this experience speak for themselves. Each city visited is distinctive in style, voice and landscape; each artist encountered unequivocally original in the creation of their personal soundtrack.

Mortensen is a Los Angeles based artist, photographer and filmmaker. In addition to photographing well-known fashion and advertising campaigns and an eclectic list of celebrities and artists, he has exhibited photographs at New York’s Whitney and Guggenheim Museums, The Getty Museum and has won an MTV Music Video Award. Mortensen has also documented his global travels in provocative photo-essays, and spearheaded AIDS awareness on the critically acclaimed benefit recording project and documentary Red Hot + RIOT. An artist and advocate, Shawn Mortensen creates a vast range of images that evoke sensational and sometimes startling results.

The South African take on the international AM90 Sound project sees Mortensen collaborate with Spoek Mathambo, singer, dancer, songwriter, fashion-face and doodle artist extraordinaire, on a filmed tour through Johannesburg and Soweto – on a rickshaw nogal – to the pulsating electro-rapping choons of one of our very own local icons.

Famed for being half of Sweat.X (with Marcus Wormstorm) and more recently Playdoe (with Sibot), Spoek Mathambo is taking the music industry by storm – possibly more so abroad than at home. Fuelled by a shared belief in Pan Africanism, together Mortensen and Spoek portray a 21st century Africa by documenting the inextricable fusion that exists between the modern and the traditional, capturing contemporary street art, architecture, dress sense and general youth culture, as well as traditional healers, herbalists and crafts people. Mortensen explains:

“I have worn Nikes since their inception in the 1970s. I was inspired to convey how Africans have embraced the brand and made it their own. Much the same as how rickshaws were imported from Asia, but were utterly re-imagined by Zulus into vibrant mobile art and pulled while wearing outrageously vibrant costumes. We wanted to play with costumes as a way to express how Electro and Rap have been absorbed and reinterpreted in the contemporary African youth culture lexicon and aesthetics. At the Kwa Mai Mai market I shot handmade sandals that featured a Nike logo – a great example of how local culture has embraced the brand and made it their own.”

Re-interpreting the Air Max 90 through a cultural lens, Spoek and Mortensen have produced an optimistic and multifarious tale of Africa, fusing colour and traditions with their irreverent humour.

The culmination of the project will be exhibited at Gallery on 4th in Melville, Johannesburg later this year. 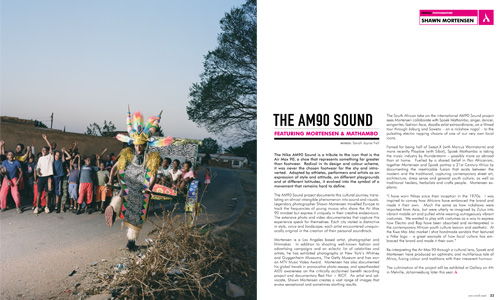