Nollywood and the Death of Photography

Pieter Hugo is quickly gaining notoriety as Africa’s premier photographer for his reinvention of the representation of Africa to the West. Frequently quoted for declaring the death of photography, Hugo is indicative of a generation whose sensibility is fine-tuned to the delicate role of the photographer, realising that to photograph is by no means to capture the truth. “I have a deep suspicion of photography,” he says, “to the point where I do sometimes think it cannot accurately portray anything, really. And I particularly distrust portrait photography. I mean, do you honestly think a portrait can tell you anything about the subject? And, even if it did, would you trust what it had to say?”

The Cape Town-based artist’s keen awareness of his vocation’s complexities is reflected in the quality of his work that has the mark of a perfectionist and an aesthetic so deeply sublime that can only have happened at the hand of the finest of artists. Hugo has produced numerous captivating monographs documenting the cultural nuances of Africa, with subjects including the Rwandan genocide, people with AIDS and Tuberculosis, and a range of characters symptomatic of their cultural domain, from Afrikaans farm boys and people with albinism, football supporters and taxi washers, to the enigmatic West African ‘Hyena Men’. His most recent series, Nollywood, explores Africa’s largest film industry and the third largest in the world, the cinema of Nigeria.

The real ‘Nollywood’ is booming, churning out around 1500 films a year – more than Hollywood can boast – and at just fifteen years old is already a $500-million industry. Nigerian films have even surpassed American films in popularity all over Africa, dealing with topics that concern ordinary modern Africans and relayed in traditional story-telling modes using the symbolism and mythology of much older beliefs. It is a salient instance of self-representation in Africa, singular in the adept utilisation of mass media to retell the tale of a rich cultural heritage on its own terms, a tale so often misrepresented in its telling.

Hugo’s Nollywood is a collection of portraits staged to capture the essence of Nigerian cinema in all its melodramatic voodoo-horror-flick glory. He and the actors work together to recreate the stereotypical myths that inspire their cinema, producing an incarnation of Nigeria’s cultural core, a project that is effectively as viscerally real as it is visually surreal.

The staged nature of the portraits lends them an element of humour that is a departure from Hugo’s earlier work. Hugo is frequently accused of romanticising and exploiting his subjects for their exotic otherness, and resolving this debate is no simple task. Nollywood however is more of a re-presentation than a representation, portraying the so-called ‘marginalised other’s’ self-representation: the exotic characters we see have been reflexively created by the people in the photographs who have chosen to present themselves in this way, not for the voyeuristic lens of the Western photographer but for their own idiosyncratic and flourishing film industry. Hugo is not ‘mastering the exotic’ through his photography but rather being allowed to enter a space of simulation and play with it. And if the results seem bizarre, perhaps this says more about the viewer of the photograph than the photograph itself.

The final product is a poignant commentary on the problematics of photography as we see the increased difficulty in distinguishing simulation from the real, fiction from fact, accuracy from truth: these are photographic records of real actors in a contrived setup, imitating their real vocation which is itself an imitation of life. This poignant undercurrent is a common thread binding Hugo’s body of work, ultimately isolating him as a forerunner in his field. Ironic then that a photographer so convincing in his mistrust of photography can nonetheless use a camera to create images so moving that they at once reaffirm the overwhelming value of the person behind the lens. 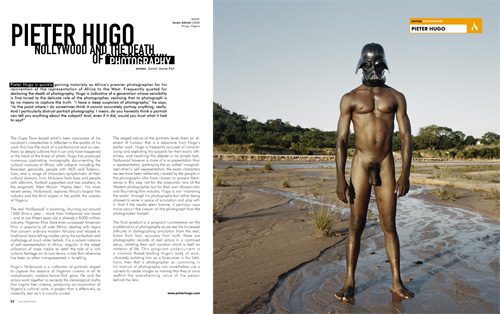 Pieter Hugo: Nollywood and the Death of Photography

Pieter Hugo: Nollywood and the Death of Photography by Sarah Jayne Fell, in one small seed issue 14.